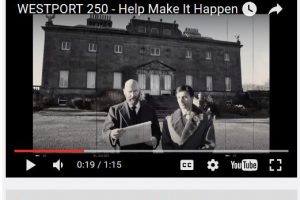 By Biddy Hughes on 2nd February 2017 in General

Become a Part of It by Pledging to the FundIt Campaign

In 1767, an ad was placed in Faulkner’s Dublin Journal by the 2nd Earl of Altamont Peter Browne Kelly advertising for tradesmen to build a new town as designed by architect William Leeson. This is considered the foundation year of Westport Town.

A group of people has gathered in 2017 to commemorate this landmark anniversary – to plan, oversee, promote & find the finances for a year-long programme of celebrations.

The brand new programme will run all year long and will include an Air Show, a historical conference, children’s arts festival, a worldwide gathering of Mini car enthusiasts as well as the return of the Westports of the World. The Wesport250 Steering Committee is busy raising sponsorships from corporates, funding from the council and grants to make the entire programme happen. This week, they are also giving individuals – like YOU – the opportunity to contribute to the Launch Celebrations.

The Westport250 Launch Celebration take place on St. Patrick’s weekend – the same date as the advert – and features:

Let’s make it a magic moment of civic pride and a brilliant recognition of everything that we love about Westport. We are asking you to help set the tone for this year-long celebration by donating what you can – we have pledges (with rewards!!) from €25 right up to €1,000 to fit all budgets.

Lend your support and take away a pride in knowing that you’ve made this memorial event happen but also a Westport250 mug or bag, tickets to Patricks or join in the VIP Viewing of the Fireworks from the best vantage spot on top of the Coast Hotel, Westport.

Check out our FundIt Campaign for the Westport250 Launch Celebrations on St. Patrick’s Day and enjoy Alan Clarke’s inspirational video by clicking here.

Westport House is an historical marvel and veritable national treasure thanks to its legendary beginnings dating back to the 1500’s when Grace O’Malley, Pirate Queen of Connacht, built one of her many castles here.
View all posts by Biddy Hughes →
Sale of Westport House
Winners for Innovation