We are delighted to announce the partnership of two Mayo stalwarths: Westport House and Foxford Woollen Mills.

One of the last working mills in Ireland, Foxford was founded by an Irish Sister of Charity in 1892 shortly after the Great Famine. The early years at Foxford were a struggle, but the faith of the Sisters and the diligence of the local 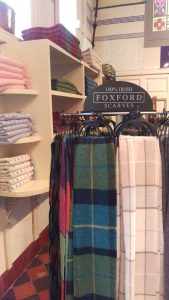 people won out, and by the turn of the century, the mill had begun to thrive. Sisters and local people worked side by side, the mill was a success. The mill overcame many challenges over the years, in order to survive. Today, it is a thriving mill with master craftspeople creating beautiful pieces for sale in Foxford’s stores around Ireland – now including one in the basement of Westport House.

The story of the Browne family of Westport House is a similar one – dating back to the 16th century castle that used to be sited here and the family’s famous ancestor, Grainne Mhaol, who is Sheelyn & Karen Browne’s 14th great grandmother – featuring the design in three phases of the house itself by some of the most emminent architects of their time (including Richard Cassels, Benjamin and James Wyatt). The story of the family and the house tells tales of pirates, slave emancipators, the Famine years and most recently, of pioneering efforts in tourism to get Westport on the map as a tourist destination. There have been many challenges in the Browne’s family time and they are continuing still.

Nonetheless, this partnership is a wonderful coming together of two Mayo icons in partnership. 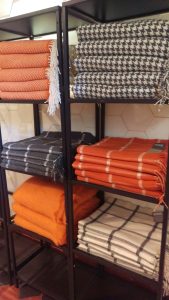 We hope you’ll visit the Foxford Shop in the basement of Westport House. Stocking a range of beautiful quality throws from various collections, knitwear, scarves, tweed hats and candles, Westport House is thrilled to be able to offer it’s visitors the opportunity to take home a little piece of heritage from Co. Mayo.

Please stop into the Old Restored Kitchens to enjoy a cuppa and a cake while you’re there.

We look forward to welcoming you.