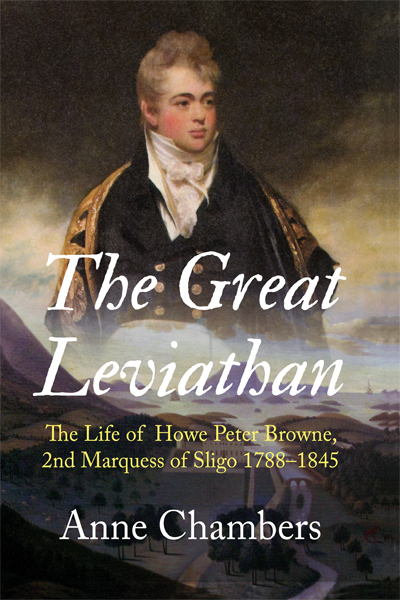 The Great Leviathan
The Life of Howe Peter Browne,
2nd Marquess of Sligo 1788-1845
by Anne Chambers.

Westport House is proud and very excited to announce the launch of Anne Chamber’s long-awaited biography on our very own Howe Peter Browne. The 2nd Marquess of Sligo is one of the more colourful characters in the history of Westport House and we cannot wait to read all about him. Anne is famed for her biographies of Grace O’Malley and has a very close connection with Westport House.

From Ireland, England, France, Austria, Greece, Turkey and Italy to America and the West Indies, overflowing with historic events, from the French Revolution to the Great Irish Famine, with a cast of the famous and infamous, Howe Peter Browne, 2nd Marquess of Sligo, lived life to the absolute limits.

Privileged yet compassionate, charismatic yet flawed, Regency Buck, Irish landlord, West Indian plantation owner, Knight of St Patrick, Privy Counsellor, intrepid traveller, intimate of kings, emperors and despots, favoured guest in the fashionable salons of London and Paris, patron of artists and pugilists, founder of the Irish Turf Club, friend and fellow traveller of Lord Byron, treasure-seeker, spy, sailor and jailbird, as well as the father of fifteen children, the astonishing range and diversity of Sligo’s life is breathtaking.

From a youth of hedonistic self-indulgence in Regency England to a reforming, responsible, well-intentioned legislator and landlord, Sligo became enshrined in the history of Jamaica as ‘Emancipator of the Slaves’ and in Ireland as ‘The Poor Man’s Friend’ during the most difficult of times.

Eight years in the writing and sourced from over 15,000 primary contemporary manuscripts located by the author in private and public archives around the world, The Great Leviathan sheds new light on significant historical events and on the people who shaped them in Ireland, England, Europe and the West Indies during a period of momentous political turbulence and change.