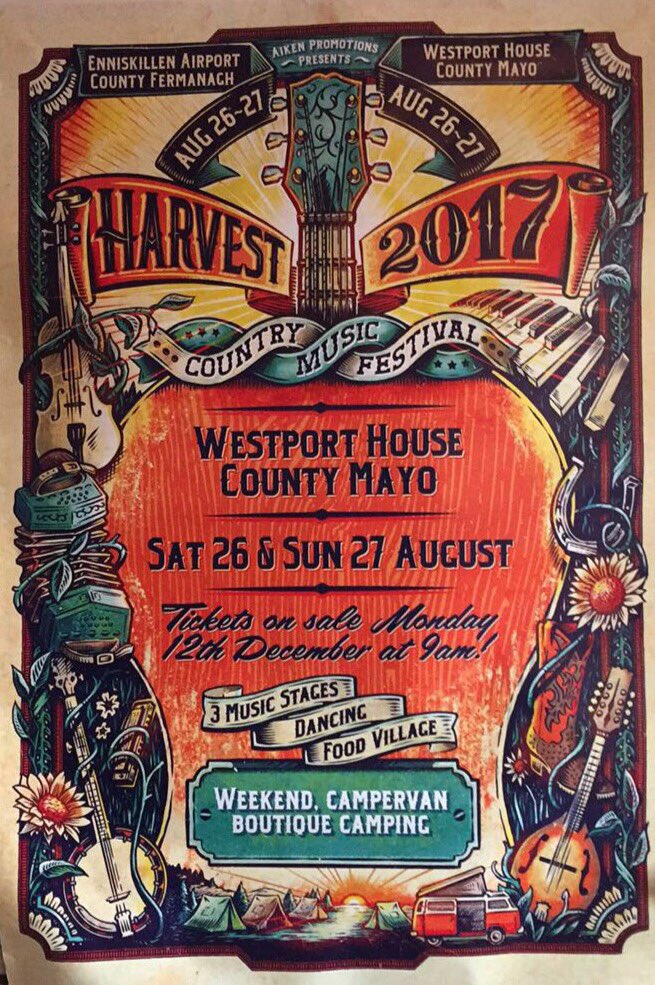 TICKETS ON SALE on www.TicketMaster.ie

MIRANDA LAMBERT & NATHAN CARTER CONFIRMED AS THE HEADLINE ARTISTS FOR 2017

Aiken Promotions has announced details of a brand new Country Music Festival that will take place in 2 different locations on Saturday 26 & Sunday 27 August 2017 at Westport House, County Mayo and Enniskillen Airport, County Fermanagh. Tickets go on sale Monday 12 December at 9am from all usual outlets.

HARVEST 2017 will be 2 days of live entertainment featuring over 30 acts performing at each Festival across 3 Music Stages. There will also be dedicated Dancing sessions over the weekend. For those country music fans who want to enjoy the full Festival experience, a food village, boutique camping and campervan facilities including family friendly zones will be on offer.

International multi-platinum and award winning country superstar MIRANDA LAMBERT and country music singing sensation NATHAN CARTER have been confirmed as the headline Artists for HARVEST 2017. As well as Artists from USA and the UK, the Festival will also feature homegrown talent including CLIONA HAGAN, PETE KENNEDY and HURRICANE HIGHWAY. WARD THOMAS and JAKE CARTER have also been added to the line up with more Artists to be announced over the coming weeks…

Check out stage times and a map of the event here!

Tickets on sale on Ticketmaster as follows:

Over 12’s will require a ticket.

Aiken Promotions are delighted to announce the addition of legendary Mississippi singer and Country Music Hall of Famer CHARLEY PRIDE to the Harvest line-up, joining headliners MIRANDA LAMBERT and NATHAN CARTER. The artist who has scored a remarkable 52 top ten hits in the Billboard Country charts has a huge following and a special connection with Ireland.

Nashville singer-songwriter KIP MOORE is about to follow-up two very successful albums on MCA Nashville. His new single “More Girls Like You” hit radio last month.  Just added to the line-up are Texas and Oklahoma duo MADDIE & TAE, the darlings of the American country music scene whose debut single “Girl In A Country Song” made them only the third female duo to peak their debut single at #1 in the history of the Billboard Country singles chart. Another Nashville duo, DAN + SHAY, AKA Dan Smyers and Shay Mooney, have built up a great live reputation opening for the likes of Hunter Hayes and Blake Shelton in recent years. Illinois singer MO PITNEY is definitely a rising star on the US scene. His debut album, Behind This Guitar, was released in October 2016 and charted at No. 10 on Billboard’s Top Country

Albums in its first week. Phoenix, Arizona singer-songwriter COURTNEY MARIE ANDREWS is a real critics favourite. Her third album Honest Life received rave reviews and she is about to make her debut appearance on Later with Jools Holland in April.

Representing the resurgence and popularity of Country Music in the UK at the very first Harvest country music festival, we have THE SHIRES, a English country-pop duo, whose second album My Universe became the fastest-selling UK country album in history when it was released in October 2016.  Another English duo WARD THOMAS has been dubbed “Britain’s first country stars”. Their second album Cartwheels reached number one making them the first British Country act to top the UK album charts.  Actor and singer SAM PALLADIO was born in Kent in the UK, not that you’d know from his character Gunnar Scott in the hit ABC series Nashville! Expect a debut album soon following his brilliant duet with Irish singer Una Healy. Meanwhile, FRANKIE DAVIES from Jersey is fast becoming a favourite amongst UK based country singers. And keep an eye out for JAKE CARTER, the Liverpool-born younger brother of Nathan set to become the next family sensation.

Aiken Promotions are delighted to have some of Ireland’s best young Country Music talent in the Harvest 2017 line-up. Former Saturdays star UNA HEALY recently announced her debut album The Waiting Game, the first single of which is the hit duet Stay My Love with Sam Palladio. DONNA TAGGART from Omagh, County Tyrone, has enjoyed great success in the last twelve months and just signed to Warners in the US for the release of her forthcoming third album. From County Down, 19-year-old CATHERINE McGRATH has also signed to Warners and racked up in access of 1 million streams on Spotify for her debut EP ‘One’.  Also from Omagh, country pop and rock star LEE MATHEWS is riding on the success of four number one singles from his latest album It’s A Great Day To Be Alive. A big favourite in Ireland right now is CLIONA HAGAN from Tyrone who is bringing a real natural vibrancy to the live scene, as is NIAMH LYNN who Ryan Tubridy called “The Imelda May of Country Music” for her fantastic retro-country aesthetic. Westport local heroes HURRICANE HIGHWAY have been bringing their US country-rock styled show all over Europe in the last two years, and RIAH BUTLER from Galway is making huge waves in Nashville after the release on her new EP ‘On Sundays’.

4th Stage Added – Getting Up Close & Personal at the HARVEST CAFÉ

Festival goers will get the chance to get up close and personal to songwriters with the addition of the Harvest Café performance stage to Harvest 2017.  Harvest Café will feature the people behind the music with the likes of US multi #1 hit writer EARL BUD LEE famous for songs such as ‘Friends In Low Places’ (Garth Brooks), ‘Who Are You When I’m Not Looking’ (Blake Shelton) and ‘One Night at a Time’ (George Strait), DON MESCALL famous for ‘Secret Smile’ (Rascal Flatts) as well as many hits for artists such as Neal McCoy, BackStreet Boys, Boyzone and more, VICTORIA SHAW behind award-winning songs like ‘The River’ (Garth Brooks) and ‘I Love The Way You Love Me’ (John Michael Montgomery) and STEPHANIE URBINA JONES who wrote the #1 hit ‘My Baby’s Got a Smile on Her Face’ for The Voice USA winner, Craig Wayne Boyd.  Homegrown songwriters will also feature including JUSTIN McGURK and MEGAN O’NEILL whose song ‘Don’t You’ was featured on hit TV Show Nashville. Harvest Café will be curated by PETE KENNEDY and will be a great opportunity for the fans to hear the stories behind the music directly from the creators in an intimate setting, such as the famed “Bluebird Cafe” in Nashville Tennessee.

As well as the music, there will be dedicated Dancing sessions over the weekend.  For those Country Music fans that want to enjoy the full Festival experience, a food village, market stalls, funfair, full bar facilities, camping options including Glamping, campervan facilities and family camping area will all be on offer.

THE LINE-UP FOR WESTPORT WILL BE:-

Over 12’s will require a ticket.