The award winning Mayo Manchester Tradfest which is now in its sixth year runs from Thursday 2 August to Wednesday 8 August. The week long festival of traditional Irish Music, Song and Dance features over 100 events involving 500 performers.  And this year, we have a special Promenade Performance!

One of the key events of  Tradfest takes place at Westport House with a special outdoor promenade performance on the steps of Westport House. This will be followed by a short Parade by The Fianna Phadraig Pipe Band to the Grace O’Malley Statue in the grounds of Westport House.  Alongside the pipers, Joe Keegan from the BBC TV Show, The Voice, will be performing a special rendition of the hit song Caledonia made famous in Ireland by Dolores Keane, the acclaimed Irish singer.

The acclaimed Irish Singer, Musician and Dancer might even be tempted to perform a few reels in front of the Grace O’Malley Statue. A host of special guests will be invited to the free performance which include ‘The Voice of Old Trafford’ – Mr Alan Keegan from Manchester United Football Club. 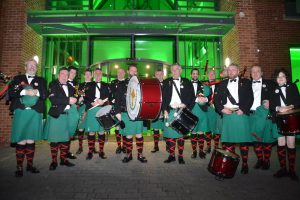 The award winning Fianna Phadraig Pipe Band are celebrating their 70th anniversary this year and are the UK’s longest running Pipe Band. They are one of the few Pipe Bands in the world to have the honour of being invited to perform at both the 50th and 100th anniversary celebrations of Ireland’s Independence in Dublin.

We are delighted to welcome them to Westport House for this special performance.