All Our Exes Live in Texas

Aiken Promotions today announced that Logan Brill, Jarrod Dickenson and All Our Exes Live in Texas will join the line-up for the Harvest 2017. Taking place in Westport House, County Mayo and Enniskillen, County Fermanagh each festival will have 2 days of live entertainment featuring 40 International and Irish acts across 4 different Music Stages.

Following her independent sophomore album release ‘Shuteye’, 25-year-old Logan Brill continues to define herself as one of the most important young artists in Nashville today. With a stunning voice that goes toe to toe with Nashville’s finest, the young Knoxville native opts for grit and authenticity over pristine pop in her song choices, drawing comparisons to Bonnie Raitt, Brandi Carlile, and Mary Chapin Carpenter from press.

Storytelling is something of a Texas tradition and singer-songwriter, Jarrod Dickenson can spin a yarn with the best of them. Hailing from Waco, now based in Brooklyn, Dickenson spends most of his time on the road bringing his own particular brand of soulful Americana to a wide variety of music loving audiences around the globe.

Jarrod’s critically acclaimed album ‘The Lonesome Traveler’ and his subsequent EP ‘Songs From Willow St’ paved the way for him to tour the UK, Ireland and Europe extensively over the last several years. Breakout performances at Glastonbury and Larmer Tree Festival, along with recent tours supporting legendary artists such as Bonnie Raitt, Don McLean and The Waterboys have earned Jarrod a formidable and loyal fan base across the globe, including BBC radio hosts Dermot O’Leary, Cerys Matthews, Huey Morgan, Janice Long, Robert Elms and Alex Lester. Jarrod’s new album, ‘Ready The Horses’ to be released on Decca Records autumn 2017.

“In the tradition of old southern Americana, but with a feel of something current; storytelling with soul.” -Chris Hawkins, BBC Radio 6 Music

ALL OUR EXES LIVE IN TEXAS
All Our Exes Live in Texas is a fantasy draft of Sydney’s finest singer-songwriters – Elana Stone, Katie Wighton, Hannah Crofts and Georgia Mooney. On mandolin, ukulele, accordion and guitar, the Exes are a powerhouse of charm and songwriting prowess. When you come to an All Our Exes Live in Texas show brace yourselves to experience four uber talented musicians and gifted song-writers, each with their own unique vocal beauty and individual charm. Add to this, great humour, whip-cracking banter and an on-stage synergy that is as magical as it is alluring, and there’s no chance you can resist the call of the Exes sirens.

All Our Exes Live in Texas have toured with The Backstreet Boys (USA), Passenger (UK), Nathaniel Rateliff and the Night Sweats (USA) and Tiny Ruins (NZ), not to mention Australian icons Megan Washington, Kate Miller-Heidke and Mama Kin. The Exes share a deep passion for vocal harmonies and heartbreakingly good songwriting. This killer combination has seduced audiences across the country and the world as they criss-crossed Australia from Port Fairy Folk Festival to Darwin Festival, Woodford Folk Festival, WOMADelaide and The National Folk Festival, not to mention closing proceedings at the Sydney Opera House for TEDx, to an audience of 4500 creative innovators who exploded into rapturous applause.

Since the release of their self-titled, widely celebrated EP, All Our Exes Live in Texas has embarked on three national headline tours releasing singles Tell Me, Sailboat and The Devil’s Part from their debut album, When We Fall. They were shortlisted for the Vanda & Young Songwriting competition and were nominated for four National Live Music Awards.

Logan Brill, Jarrod Dickenson and All Our Exes Live in Texas will join the artists already announced for Harvest 2017. They include:

Get up close and personal to songwriters behind the songs at the Harvest Café
Enjoy the full festival experience at dedicated Dancing sessions a food village, market stalls, funfair, full bar facilities.

Camping options including Glamping, campervan facilities and family camping area are all on offer.

The full line-up will be the same for both festival sites. The artists playing Westport House on the Saturday will play Enniskillen on the Sunday and vice versa.

THE LINE-UP FOR WESTPORT WILL BE:- 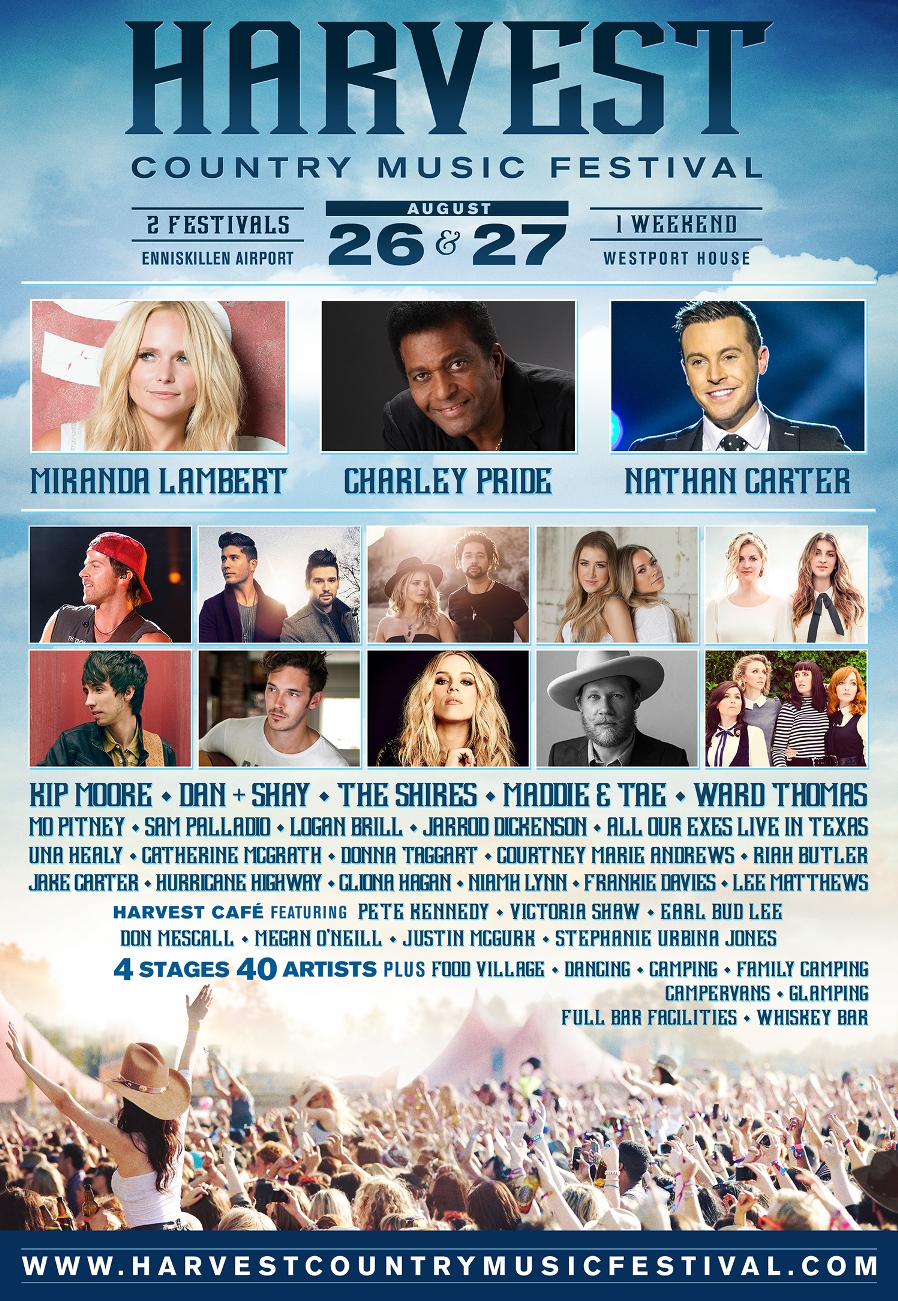