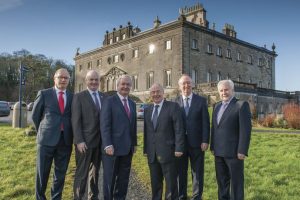 The Hughes Family Take the Reins

Exciting News. A new chapter has begun at Westport House. Local brothers, Cathal, Harry and Owen Hughes of The Hughes Group have now successfully completed the acquisition of the historic house and estate from the Browne family.

In February 2016, the Browne family placed the historic Westport House and Estate on the market having owned it for generations. The estate has been overseen in recent years by the personal representatives of the late Jeremy Browne, Lord Altamont, namely Con Casey of LHM Casey McGrath Accountants and Dermot Furey of Gartlan Furey Solicitors.

Mr. Cathal Hughes, Chairman of the Hughes Group said: “I want to acknowledge all the efforts of the Browne family over the years to maintain this beautiful house and estate and we look forward to continuing this great work which was very much the vision of the late Lord Altamont and his family. We will now move ahead with our plan to invest up to €50m in new facilities which will lead to the creation of 200 new jobs over the next five years”.

“As a local business family, we are delighted to be able to make this investment in our home town. We realise the importance of Westport house as a tourist amenity to the whole of Mayo and we will work very closely with the planners in Mayo County Council to ensure that the integrity of Westport House and Estate is maintained whilst at the same time creating a viable sustainable business model that is in everybody’s interest long-term”.

“Our ambition is to make Westport House one of the finest tourist attractions in the whole of Ireland and one that the people of Westport can be justifiably proud of”.

Westport House already employs some 47 people and has an economic benefit to the region of €51m. Some 61% of tourists said that Westport House is the biggest reason why they visit Mayo in a 2016 study carried out by Mayo County Council.

“This transaction has been a long and, at times, a difficult journey and I want to thank all those who supported the efforts from our local TDs to the community of Westport. In particular, we would like to thank the Browne family for their hard work and dedication in keeping the gates of Westport House open to the public in difficult times. I would also like to thank the great team at Westport House who won a coveted National Tourism Award earlier this year”.

“I want to thank all of those involved, particularly the executors Con Casey and Dermot Furey and their team, Peter Hynes Chief Executive of Mayo County Council, NAMA , and my own department for the very constructive approach they took to resolving this matter. I would also like to single out the great work done by Neill O’Neill the managing editor of the Mayo News who campaigned to secure the future of Westport House and who tragically passed away earlier this month”

“I am very pleased that, through the co-operation of all parties involved, we have arrived at a successful conclusion. I want to wish the new owners, the Hughes family every success and stress that I will assist them with their own ambitious plans for this treasure. I also want to congratulate Harry Hughes on being crowned the EY Entrepeneur of the Year for 2017. It is great tribute to the Hughes family and the entire workforce of PortWest” Minister Ring concluded.

Mr. Peter Hynes CEO of Mayo County Council noted: “We are delighted that this process has now concluded and want to warmly thank all of those involved in delivering such a positive result for Westport and for Mayo. We look forward to a new chapter in the story of Westport House and a bright future for tourism in Mayo as a result of this investment.”

Westport House is an historical marvel and veritable national treasure thanks to its legendary beginnings dating back to the 1500’s when Grace O’Malley, Pirate Queen of Connacht, built one of her many castles here.
View all posts by Biddy Hughes →
What’s New For Winter Wonderland : The Story of Stumpa
Harry Hughes wins EY Entrepreneur of the Year 2017

7 Responses to A New Chapter at Westport House