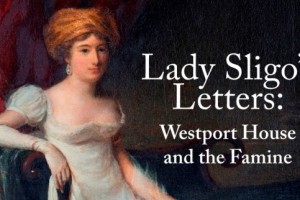 By Biddy Hughes on 2nd April 2015 in Exhibitions

Westport, Co. Mayo – 2nd April, 2015 – Westport House is honoured to have U.S. Ambassador, Kevin O’Malley, join them on April 14th to open a brand new exhibition about the family and house’s efforts during the Great Famine.  We hope that you can join us too.

It will tell – through a series of letters written by Lady Sligo – of the family’s contribution to helping the people of Westport and Mayo during a time of devastation.  The letters of Hester Catherine Browne (1800-1878), second marchioness of Sligo, or Lady Sligo, tell the remarkable story of how her family responded to the catastrophe of the Great Hunger.

Ambassador O’Malley’s paternal grandparents emigrated from Westport in County Mayo approximately one hundred years ago.  As Westport House is built on the ruins of an O’Malley castle and the Browne family who own the house are direct descendants of Grace O’Malley, the notorious Pirate Queen, they are delighted to welcome U.S. Ambassador “home”.

This exhibition is yet another great reason for culture vultures to visit beautiful Westport House and is included in the admission price to Westport House & Grounds.  Please visit www.WestportHouse.ie  for all details.

Please visit the US State Department’s website for the ambassador’s biography.

Please contact Biddy Hughes at 087 923 8187 or marketing@westporthouse.ie with any questions.

The Lady Sligo Letters: Westport House and the Great Hunger.

The Great Hunger or simply, The Famine as it is known in Ireland, was a period of mass starvation, disease and emigration in Ireland between 1845 and 1852 resulting in the deaths of more than a million people and emigration of 1.5 million to North America and other countries.  The letters of Hester Catherine Browne, second marchioness of Sligo, or Lady Sligo, tell the remarkable story of how her family responded to the catastrophe of the Great Hunger.

Lady Sligo, who lived from 1800 to 1878, was the wife of Howe Peter Browne, the second Marquess of Sligo. The Brownes were members of the landed gentry, Ireland’s upper class.  The family owned Westport House (SHOW PICTURE), a beautiful home in a poor area of County Mayo in the West of Ireland.  They were the largest landowners in County Mayo with thousands of tenants living on their estates.  The reason the title is Sligo – even though the family home is in Mayo – is a simple matter of geography.  In 1800 there was already an Earl of Mayo, a Viscount Galway to the south and a Lord Roscommon to the East. The Atlantic Ocean was to the West so the only title to be had was the North – the land of Yeats and black cattle – Sligo.

The Browne family built Westport House in the early 18th century on the foundations of a former family castle of the O’Malleys Clan.  The estate overlooks the Atlantic Ocean, Clew Bay and Ireland’s Holy Mountain, Croagh Patrick.  The Brownes, amazingly, continue to own the house and estate and nowadays it is open as a visitor attraction welcoming 140,000 visitors each year. The beautiful historic house is the jewel in the crown and you can also enjoy a children’s adventure park with rides and activities for under twelve year olds or adventure activities such as zorbing and high ropes, attend a big outdoor event or music concert in the grounds or pitch your tent or caravan in the onsite park.

The Brownes are direct descendants of Grace O’Malley, the famous 16th century, “Pirate Queen” who was chieftain of the O’Malley clan.  Originally Catholic, the family had little choice but to join the Anglican Church in the 18th century to keep their property.  The title, Marquess of Sligo, was bestowed on John Browne in 1800.  His only son, the flamboyant, Howe Peter, succeeded him in 1809.  Howe married Hester Catherine de Burgh in 1816. She was the daughter of the 13th Earl of Clanricarde. The couple had 14 children.

In 1829, Howe Peter was one of the few Irish peers who supported Catholic Emancipation. He was appointed governor of Jamaica in January 1834, overseeing the freedom of the slaves there, and the “free village” of Sligoville was named in his honour.  The second marquess died at the beginning of 1845, the eve of the Great Hunger.  As her husband’s health declined, Lady Sligo took over the day to day running of the Westport House. She worked closely with George Hildebrand, the steward of the estate.  When her 25 year old son, George John Browne, inherited the estate in 1845, Lady Sligo supported him through the difficult years of the Great Hunger. Unlike many landlords, the third marquess assisted his poor tenants and spoke out against the harsh policies of the British government.  The family borrowed money in order to help their tenants.

About a third of Lady Sligo’s more than 200 letters relate to the Great Hunger period and detail her correspondence with Hildebrand. These letters were mostly written from the family’s other homes in Dublin, London and Tunbridge Wells.

County Mayo during the Great Hunger

County Mayo was one of the worst affected areas during the tragic years known  as the Great Hunger (An Gorta Mór).  Philanthropic Quakers who travelled to the west provided poignant eye-witness accounts of the suffering of the people, especially in the remote Belmullet peninsula.  The criticized the local landlords for their indifference and parsimony.  There were exceptions, however. George, the third Marquess of Sligo, despite his relative youth, worked tirelessly to alleviate the suffering of his tenants.

The Lady Sligo Letters: Westport House and the Famine Exhibition.

This Exhibition, based on the letters of Lady Sligo, tells the remarkable story of how one family, who were Protestants and members of the landed gentry, responded to the catastrophe of the famine years.  The exhibition is on show in Westport House in Co. Mayo, Ireland and also in Ireland’s Great Hunger Institute in the University of Quinnipiac, Connecticut.    The partnership of Academic Advisor, Professor Christine Kinealy, Director of Ireland’s Great Hunger Institute and the Browne family and the staff at Westport House have made this exhibition a reality.

The Lady Sligo Collection consists of over 200 letters, approximately one-third of which relate to the Great Hunger period. They are housed in the Arnold Bernhard Library in Quinnipiac University, CT, and may be viewed with prior permission.

Westport House is an historical marvel and veritable national treasure thanks to its legendary beginnings dating back to the 1500’s when Grace O’Malley, Pirate Queen of Connacht, built one of her many castles here.
View all posts by Biddy Hughes →
Westport House honoured with Award of Excellence
New Greenway Through Westport House Estate