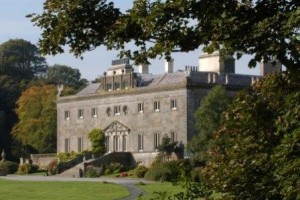 Westport, Co. Mayo.  (Wednesday, 28th January 2015).   At a reception in Dublin Castle on Tuesday night, Vivienne Jupp, Chairman and Brian Stack, Managing Director, CIE Tours International presented plaques to 94 winners at the 25th CIE Tours International Awards of Excellence.  Winners were chosen according to feedback from over 30,000 customers in 2014 on more than 450 providers of accommodation, dining, tours and attractions.  Merit awards were presented to those achieving over 90% in customer surveys.

Westport House, now in its third year of welcoming CIE Tours, was honoured to receive a merit award: the only award given to a visitor attraction in Mayo and one of only five in Connaught.  It was particularly proud to stand alongside two fellow tourism partners from Westport including Hotel Westport and Clew Bay Hotel who also received Merit Awards for Connaught hotels.

Sheelyn Browne, joint managing director of Westport House was delighted with the award and said “We are absolutely thrilled to have received such fantastic ratings of 90% and higher for the Westport House experience by the thousands of CIE Tours’ passengers who visited us in 2014.  We appreciate that CIE Tours brings their passengers to see us at Westport House and in turn, we re-pay this with a warm Westport welcome from all of our team, a fascinating insight into the family who built and still run what has correctly been called Ireland’s most beautiful historic home.  We would like to especially commend and thank the whole team at Westport House for all that they do to make all of our visitors feel at home in our home.”

The ultimate in old world heritage, Westport House captures visitors’ imaginations.  The beauty of the house itself and its stunning interior is complimented by its natural parkland and lakeland setting,  its proximity and connection to Westport town as well as a story, which goes back to Grace O’Malley, the Pirate Queen of Connaught, and includes slave emancipators, pioneers and a family line that has survived alongside it.  It has all of the modern conveniences required by coach visitors including coach parking, toilets, tea rooms and a gift shop. Westport House has recently added the Westport Train Tour to its product range along with its “Lord it Up” afternoon tea and other bespoke packages.  And most importantly, we guarantee a warm Westport welcome from all of the team and family in Westport House.

Mr Brian Stack, Managing Director of CIE Tours International, said: “Based on the fact that the economy in our largest market, the United States is growing strongly, together with a substantial increase in the number of available passenger air seats to Ireland, we are optimistic that 2015 will be as good as 2014”

Westport House re-opens to the public on March 1st will be open daily from 10am and the Westport Train Tour will operate weekends in March.

Westport House is an historical marvel and veritable national treasure thanks to its legendary beginnings dating back to the 1500’s when Grace O’Malley, Pirate Queen of Connacht, built one of her many castles here.
View all posts by Biddy Hughes →
A Cracking Easter 2014 at Westport House
New Exhibtion: Lady Sligo’s Letters, Westport House & the Famine