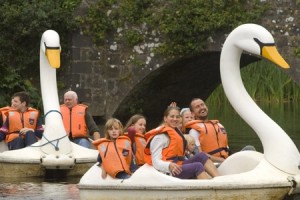 Westport, Co. Mayo – 12th August 2015 – The best of what Ireland has to offer families is revealed in today’s 2015 Primary Times STAR Awards and for the fifth year in a row, Westport House has been honoured with an award. Today, Westport House & Pirate Adventure Park was voted as Best Family Visitor Attraction (West) for the fourth year and its ghoulishly good Halloween Fest event was awarded the Best Halloween Event (West) for the second time.  The results of these unique awards, which attract thousands of entries from parents, provide a vital snapshot of what’s tops with families in Ireland.

It is no surprise that Westport House is winning awards. The beautiful historic house and its stunning interiors are complimented by equally gorgeous woods, lake and parkland grounds. Visitors love the story of the survival of the house – and the family who built and still own it – going back as far as Grace O’Malley, the 16th century Pirate Queen.  The aptly-named Pirate Adventure Park is perfectly suited to children under 12 years. It will leave them screaming for more with rides, slides, boats, trains, go karting, bouncy castles as well as playgrounds and soft-play.  Adventurers from 8 years upwards will enjoy zorbing, zip wires, high ropes, archery and laser combat games, while the 3 star Caravan & Camping Park and the Westport Train Tour continue to deliver on its motto of being the “home of family fun”.

Always innovating, Westport House has not rested on its laurels in 2015.   New this year, Westport House has had added a 19th century Carousel, Helter Skelter and Chair-o-Planes for the little ones as well as offering Bell Tents to hire for hassle-free camping.  The bungee-like Sky Trek & Drop is new for adventurers this year and the Westport Train Tour extended its route this year to loop Westport town. And this summer won’t pass without a concert taking place at Westport House:  the first “Hooley at the House” in partnership with MidWest Radio will take place on August 30th (get your special event tickets which include an afternoon of country music and free use of Westport House & Pirate Adventure Park here).

Sheelyn Browne, joint managing director of Westport House was delighted with the awards and said “Knowing that these two prestigious awards were voted by parents is testimony to the fantastic family experience that Westport House offers not only during the summer months but also into Autumn and Winter.  We are honoured that our customers thought so highly of their visit!  Time and again, our hard-working team go above and beyond in helping create magical family memories for our visitors so we extend a big thank you to them.  And we are also delighted to congratulate Hotel Westport, our neighbours, on their inclusion – again – as one of the Top 10 Family Hotels in Ireland.”

Westport House is an historical marvel and veritable national treasure thanks to its legendary beginnings dating back to the 1500’s when Grace O’Malley, Pirate Queen of Connacht, built one of her many castles here.
View all posts by Biddy Hughes →
New Greenway Through Westport House Estate
The Economic Impact of Westport House