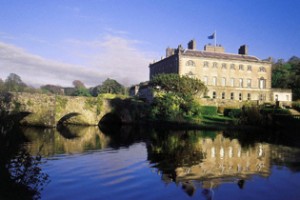 By Biddy Hughes on 29th September 2015 in Media Centre

A major new report carried out by CHL Consulting Co. Ltd on behalf of Mayo County Council has today revealed the total economic impact of Westport House Estate to the economy of the region.  The new report was launched today at Westport House Estate. Privately owned by the Browne Family for almost 400 years and open to the public since 1960, the Estate directly creates 47 jobs and accounts for €50.7 million indirect expenditure for the region. Westport House Estate has also shown significant growth in recent years with over 162,000 paying customers in 2014 – up 82% on the 89,000 visitors in 2009.)

Westport House Estate is cited as one of Ireland’s national treasures. Since 1960 the Browne Family have invested significantly in the estate in order to ensure that it continues trading as a leading tourism attraction – mainly by providing a changing and evolving range of tourism activities. This has resulted in the Estate’s rise as one of the Top 20 paying attractions in the country.

The report was carried out by CHL Consulting Co. Ltd using a full review of financial documents at Westport House Estate. An on – site survey of 400 respondents took place in July 2015. Consultations were also carried out with all local bodies and the community at large.

The 1st Earl of Altamont, John Browne, built Westport House in 1730 although it is believed that there has been a “big house” on the site since the 1500’s. The Browne Family continue to own and manage the property, and this adds a distinctive feature to Westport House, which is not only a historic property of note, but also the home of the Browne family for over 300 years. As a result of this, the house and its contents in terms of portraits, antiques, furniture, papers and archives all tell the story of Mayo and Ireland for these three centuries. The house opened to the public in 1960, and since that time a range of attractions and activities has been developed on the estate with a view to establishing Westport House as a tourism attraction with a particular focus on the family market. Over the 55 years since if opened to the public, the house and the tourism facilities developed on-site have been privately funded by the Browne Family.

Westport House is an historical marvel and veritable national treasure thanks to its legendary beginnings dating back to the 1500’s when Grace O’Malley, Pirate Queen of Connacht, built one of her many castles here.
View all posts by Biddy Hughes →
Best Halloween Event and Best Family Visitor Attraction
Westport House Wins Best Family Holiday Destination Award