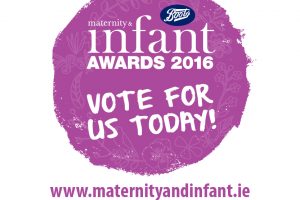 Squeeeeaaaallll! We have just found out that we have been shortlisted in the Boots Maternity and Infant magazine Awards 2016 for

The Boots maternity & infant Awards are THE most prestigious awards because they are voted, tested and approved by parents, for parents.

Now in their 9th year, the Boots maternity & infant Awards celebrate the very best products, services and crèches in the industry as well as the unsung heroes of today who go that extra mile to support families.  We were honoured to be 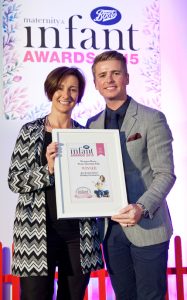 Biddy receiving the Best Family Holiday Destination from Brian (off the telly!) at the Maternity and Infant Awards, held at the Doubletree Hilton Hotel, Dublin. October 2015.

shortlisted last year and to have won the Best Family Holiday Destination award.  And having been there, we can attest to the very high quality of these awards.  Along with product awards, they provide a fantastic venue to celebrate the self-less people who are often behind the scenes.  I was honoured to have sat beside the “Dad of the Year” and the humility he showed (and the pride of his wife) was so heart warming.

This year again, the awards team up again wth RTÉ’s Today Show –  Maura Derrane and Dáithí O Sé feature all elements of the awards including the moving stories of the people award winners and the products that parents just can’t live without in March and April.

So now its over to parents to vote.

If you agree, we would really appreciate your vote in the categories below:

Westport House is an historical marvel and veritable national treasure thanks to its legendary beginnings dating back to the 1500’s when Grace O’Malley, Pirate Queen of Connacht, built one of her many castles here.
View all posts by Biddy Hughes →
Hooley Update: Tickets in Outlets & Bus Services
Free Open Day at Westport House in aid of Western Care