This project is part of the works that commenced on Westport House earlier in 2021.  It is phase one of a restoration project that is expected to be completed in Autumn 2021. The restoration project is estimated to cost in the region of €5 million and will see much needed conservation work carried out to the Georgian-era home to help prepare it for the larger €75m development project announced earlier this summer. 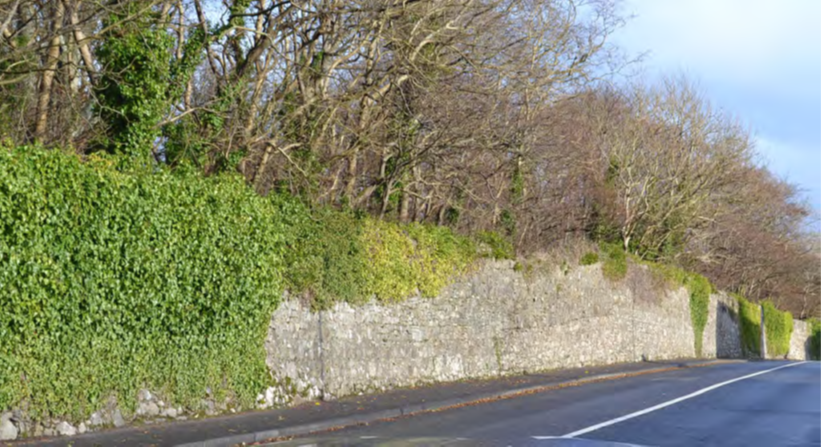 Westport House was built by the Browne family in 1730 – John Browne the 1st Earl of Altamont was an ambitious young man and at that time, much of their wealth came from the linen and flax trade. Consequently, the busy Quay harbour became an integral part of their business for importing and exporting of goods.

The original town of Westport – Cathair na Mart (Stone fort of the beeves) – was located quite near the front of the House and the town was relocated by the 2nd Earl of Altamont Peter Browne in 1767. Westport was one of the first planned towns in Ireland, designed by the architect William Leeson.

Thanks to the research of John Mayock, Clew Bay Historical Society, the original advertisement for the new town was discovered from Faulkner’s Journal on March 17 1767 and read:

“To all Bricklayers, Masons, Stone Cutters, Carpenters, Joiners, Sawyers, Slaters, Plasterers, Glaziers, Painters and all other Artificers in the Building Branch and to the public in general. This is to inform them, that a New Town is immediately to be built near the Old Town of Westport in the County of Mayo, according to Plans and Elevations &c already fixed upon, consisting of a large and elegant Market house, situated in the centre of an Octagon area of 200 feet, and to be enclosed with Twelve large well finished slated Houses, together with three avenues for Streets of thirty slated Houses, and several very large Streets for great number of thatched Houses and Cabins, to be built separately in such Streets where Houses or Cabins are to be admitted in, at an Expense from about Twenty to Forty Guineas for each House or Cabin, together with several convenient Plots for Cabins of an inferior kind. All Workmen who are willing to contract for any of the said Employments, are desired to send their Proposals particularly specifying every Article of their various Branches, in Writing, sealed to the Hon Peter Brown Kelly at Westport, Castlebar; or William Leeson, Esq, architect, any time before 6th of April next, when their Proposals will be examined, and as no preference will be given to any Tradesman, it is expected all Persons to whom it may be convenient, will apply, as such only will be closed with, as are Workmen, and willing to engage upon the cheapest Terms, and that can give sufficient Security for the Performance of their Covenant. All persons who choose to take a plot of Ground to build upon, according to the Plans and Regulations for each street, will meet with suitable encouragement. Westport is situated near the Sea Coast, in a remarkable healthy and plentiful Country, with the Convenience of very fine and large lots of improveable Ground, with Plenty of Fire and Water, and several convenient Plots for Bleach Greens, Mills, &c The Plan and Elevations &c are to be seen at Westport.”

The Quay wall runs from the pedestrian entrance at Church Lane to the principal entrance to Westport House at the Gate Lodge on the Quay. The wall is approximately 900 metres long and is fabricated from random rubble stone which came from the quarry on the Estate and is a mix of limestone and sandstone. Unfortunately, much of the wall has been constructed with small, poor-quality stone which has led to the deterioration of the wall in some parts. 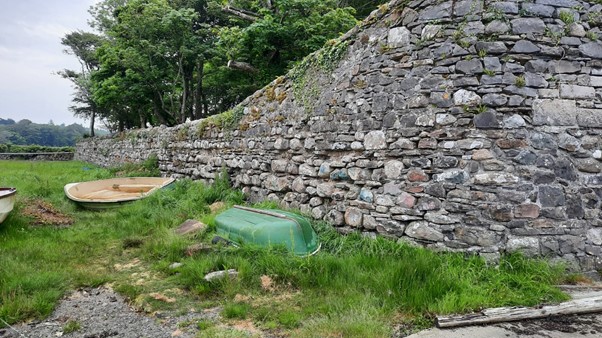 In January 2020, Mayo County Council granted us permission to undertake conservation works to the wall as it is listed as a national monument, its importance being that it is an historical representation of 18th century engineering. Over the last 100 – 150 years, the wall has been poorly maintained which also led to it becoming a health and safety risk for passing pedestrians. Storm damage, roots of trees and the growing of vegetation, such as ivy, has degraded the integrity of the wall making it unstable in parts. The restoration works that are currently being carried out is for a phased repair, restoration and future conservation of the wall. 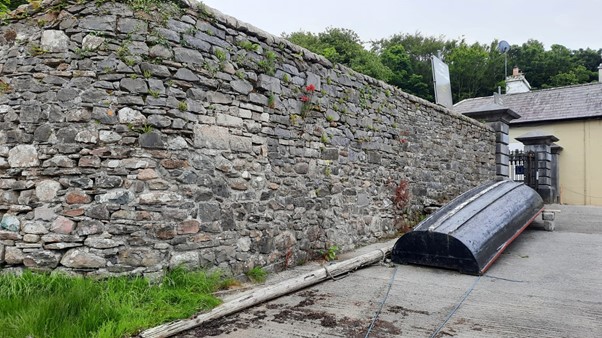 The phased restoration works will see a removal of vegetation which consists of a strip 4 metres wide along the entirety of the wall. It will also see the removal of trees which pose a health and safety risk and other emergency repairs that present a risk to passing pedestrians. 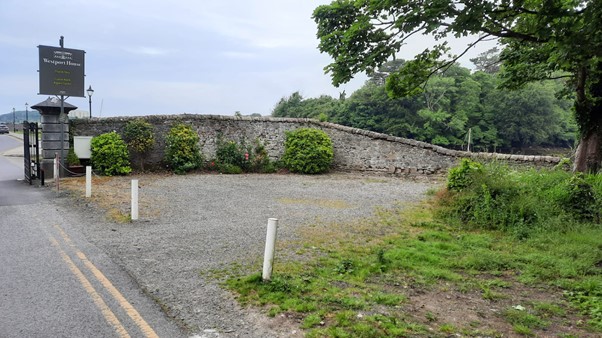 The repairs to the wall are following simple, traditional masonry techniques, which involve pining and pointing, small holes and open joints, crack repair using traditional stone stitches. At present, the works on the Quay gate are underway and it is being repointed with limestone mortar and the top stones are being reinstated as part of these works. 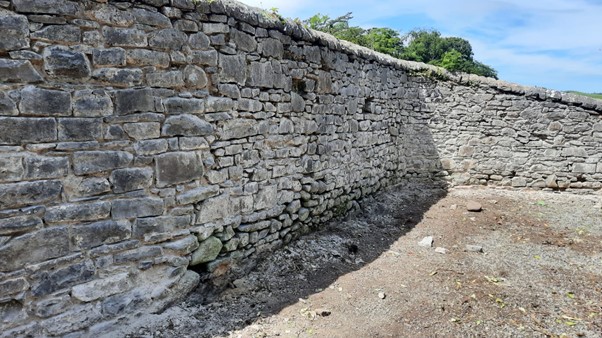 We are working in conjunction with Mayo County Council to ensure its preservation and conservation – extending its life and its historical importance to the town of Westport.
As with all of our restoration work that is currently taking place, the approach is to perform only the necessary works to make the wall structurally sound and safe again without impacting the integrity of the wall, keeping the authenticity of the historical national monument as much as possible.

With credits and thanks to Michael King, Estate Manager for his information and photos, James Howley, Howley Hayes Architects and Liamy MacNally , Mayo News.

If you have been enjoying our Restoration Blogs, we wanted you to know that we now offer Restoration Tours of Westport House daily. You will will need to pre-book as there will be limited numbers and intimate group sizes of no more than 15 people. Visitors will be met at the Construction Site Gate at the Old Bridge by the house at the tour start time. The guided element of the tour will take place outdoors where a guide will outline the core body of works taking place to protect the exterior of the house. You will then be invited in to the house to visit the main floor of the house and see the interior works. You can expect to learn more of what you’ve been reading in these blogs on the tour and in fact, Kathryn will be hosting many of the tours. The entirety of the tour will take place on the ground – I’m afraid that we will not be able to take you up on the scaffolding for obvious health and safety reasons. After the tour, you will be escorted back to the bridge gate to exit. Closed toe shoes are required and high vis vests and hard hats will be supplied for your use during the tour. Duration will be 60 minutes and the cost will be €13.50 per person. All tours must be pre-booked online at shop.westporthouse.ie. We hope to see you here soon.