Notes from the front

The front steps leading up into Westport House have always been the most prominent aspect of the estate – first impressions were terribly important in the Georgian era after all!

Over the past century, the gardens had somewhat lost their way, with the various additions and alterations distorting the landscape design that had been originally intended. Trying to get back to the original concept would mean pealing back many layers, but I was determined to do it. As with all the projects on the estate, my starting point for the research was the historic maps and old photographs – a picture paints a thousand words!

While designing and restoring the estate’s gardens, it was always at the back of my mind that the mansion house is the primary element. It should take center stage; the landscaped gardens surrounding the house are secondary – they should not impose overly on the house but rather highlight its beauty.

I felt the building needed really something special to frame its beauty and highlight the front elevation of this magnification house.

I had visited the Lyons Estate in Co Kildare a number of years ago on a college trip. At the back of the estate, two magnificent cedars flanked the landscape. It always struck me how simple the 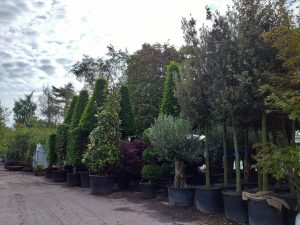 design was, the two specimen trees that both orientated the view and commanded the visitor’s attention.

Inspired by this, and wanting to replenish the stock of specimen trees on the state (the majority of which have disappeared), I began the design by positioning two semi-mature Cedrus Atlantica Glauca so that they flank either side of the house and, in time, frame it.

One of the key elements was the realignment of the gravel edging. As per the historic photographs, the edging was kept in a pristine manner, very sharp, straight and crisp. And so, as with the restoration that we undertook at the back of the house, we instated a defined metal edging.

The orientations of the lawn areas and gravel areas were re-aligned with what had historically been. This very labor-intensive job was meticulously executed by Simon McAleer and SeÁn Sweeney.

Once the metal edging was laid out, numerous trailer loads of fresh topsoil were introduced. This was carefully graded to ensure that the finished lawn would have a perfect gradient. 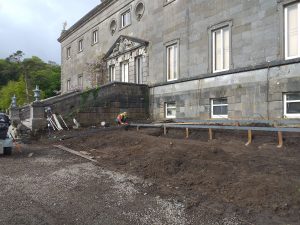 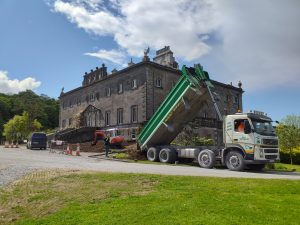 Next, it was to the planting – the exciting part! The plants all came in as mature specimens, as we wanted to create the impression that the landscape, though new, had been always here.

The central ‘L Shaped’ flower beds flanking the steps of the House and its front elevation were planted with large yew (Taxus baccata) spheres and large Magnolia grandiflora shrubs to create structure and give an evergreen show to brighten up the winter months. Under this, a herbaceous flower mixture (similar to the flower beds to the west of the house) was planted to give plenty of lush summer colour and interest. 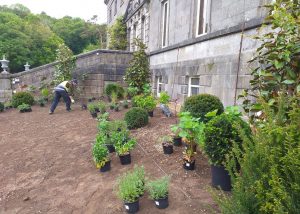 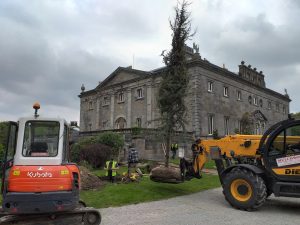 Either side of these beds, curved yew hedging was planted with a number of spring-flowering multi-stemmed Amelanchier planted behind the hedging. The evergreen curved yew hedge has two design features: Firstly, the hedge flanks the facade of the house, guiding your eye towards the central steps; secondly, there are numerous historic concrete coal bunker lids scattered throughout the lawn area, and these would be very unsightly if visible in the lawns or flower beds – the hedges cleverly disguise them, and also the stairs leading up on to the north wing terrace!

The lawns were the final element of the design. The soil was once again precisely graded and the turf lawn was rolled out like a plush, newly bought carpet. 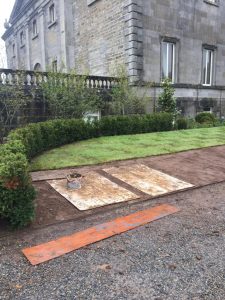 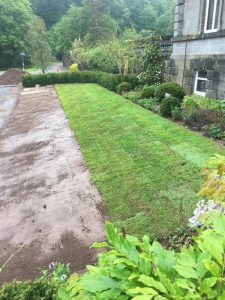 As the front of the house, landscape works near completion, our eyes are now set on working our way around to the northern side of the house, towards the house bridge. Come and visit and let us know what you think of what we’ve done so far, and watch on in awe as the estate’s grounds and gardens restoration unfolds and unfurls before your eyes. 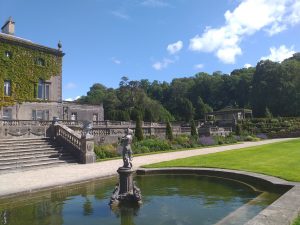 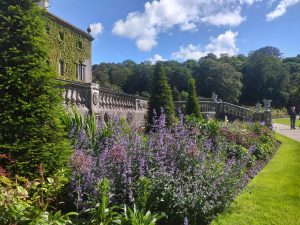