Dinner in the Large Dining Room

Westport House is currently undergoing phase one of a restoration project that is expected to be completed in February 2022. It will see much-needed conservation work carried out to the Georgian-era home to help protect the contents and stories of the house for many more generations to enjoy. 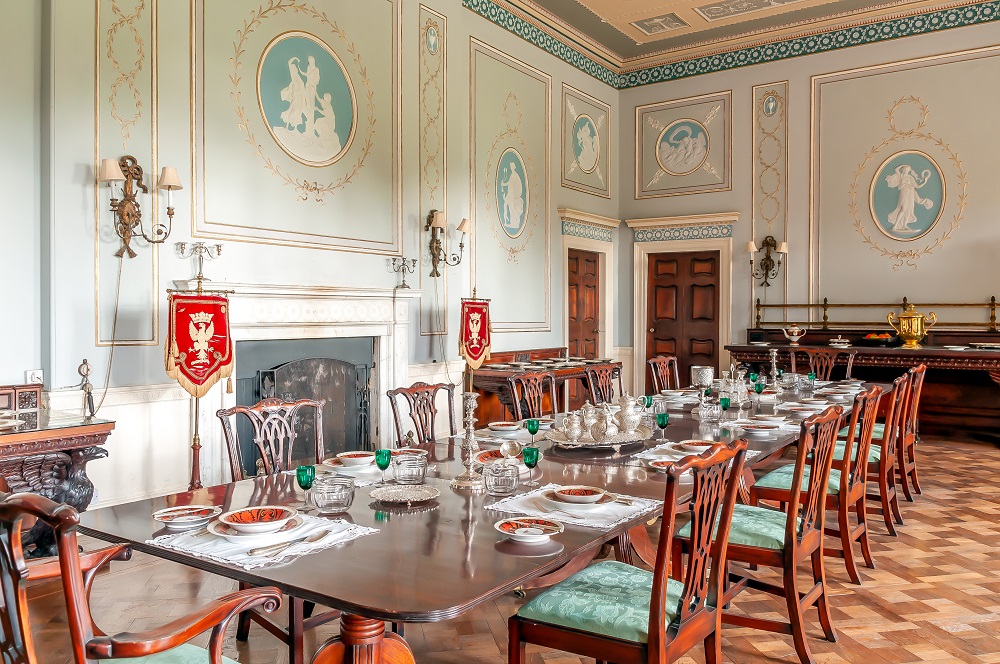 The Large Dining room at Westport House is one of the many spectacular rooms in the Georgian Manor. Designed by James Wyatt with the Wedgwood ornamentations and its distinctive blue hue, always evokes a sense of admiration and awe to our visitors when they walk through the room.

The room was completed in 1783 when the 3rd Earl of Altamont, John Denis Browne, resided in the House. The Browne family would have been constantly entertaining guests to the House and so dinner was an extravagant affair every evening of the week. Many guests to the house in the 18th and 19th century may have travelled some distance to get to Westport. They may have spent long hours – and even days – travelling by carriage to be greeted by the family on arrival. Given the lengthy travel involved, more often than not, these guests would have remained in the House for weeks at a time.

The Large Dining room would have been an important part of the everyday living in the House. Meals were prepared in the bustling basement kitchen (one floor down) and would have arrived to the butler’s galley kitchen (discretely set adjacent to the dining room) via the dumb waiter. The dumb waiter ensured that food was served piping hot.

The large dining room table would have been laid perfectly with the crockery of the House – a beautiful Chamberlain’s Worcester composite service decorated with the monogram ‘S’ – for the title the Brownes received in 1800 – Marquess of Sligo.

In the eighteenth-century, it was customary to divide dinner into two courses, which was usually a mix of sweet and savoury dishes. This would consist of a variety of dishes with a good balance of flavours. The table setting was of equal importance – the finest tableware and prepared dishes to be laid out splendidly. It was a feast for the eyes as well as the stomach! It was, of course, to attain the eighteenth-century social imperative – to impress the guests!

In 2015, TV production company Mind the Gap, filmed one of the programmes from their Lords and Ladles series in Westport House. This innovative series wasmeticulously researched. They recreated the menus of Irish Manor Houses from the 18th and 19th century. The show was hosted by Derry Clarke, Catherine Fulvio and Paul Flynn.

Here is the sample menu that was prepared by Derry Clarke for the 2015 Lords & Ladles programme:

The menu was a fantastic showcase of an array of foods from around the local area.  And fashionable food from the era – toasted tongue?  Calf’s foot jelly?  It was really a wondrous sight and presented an excellent indication of the opulence and extravagance that would have been a customary event every evening at Westport House.

Today, visitors to Westport House are treated to view the Large Dining room all prepared for dinner, with the crockery, cutlery and glassware laid out on our 20-foot Georgian mahogany table. The original table for the House was sold in the 1970s but the dining room table pictured was purchased by our owners, the Hughes of Portwest and Hotel Westport in 2018 – another example of their dedication to the restoration of this wonderful House.

Copy and photos with thanks to Kathryn Connolly, Supervisor at Westport House and Mind The Gap Productions.

If you’re an avid reader of these blogs, you will know that we started Phase 1 of this restoration project on Westport House earlier in 2021. It is the first phase of a restoration project that is expected to be completed in early 2022. The restoration project is estimated to cost in the region of €5 million and is fully funded by the Hughes family. It will see much needed conservation work carried out to the Georgian-era home to help prepare it for the larger €75m development project announced earlier this summer.