The West gardens at Westport House are very popular with our visitors who like to peruse along the narrow path and admire the plants and flowers. They may stop off to look at the adorable water feature with the cherub holding a pike fish and admire the man-made lake with the swan pedalos out on the water with happy families peddling their hearts out!

I am often asked about the stone structure in the middle of the green grass in the West Garden and I am always tickled at people’s reaction when I say it is 3,000-year-old Greek Sarcophagus! Not what one expects in the pleasure gardens of a Georgian manor! 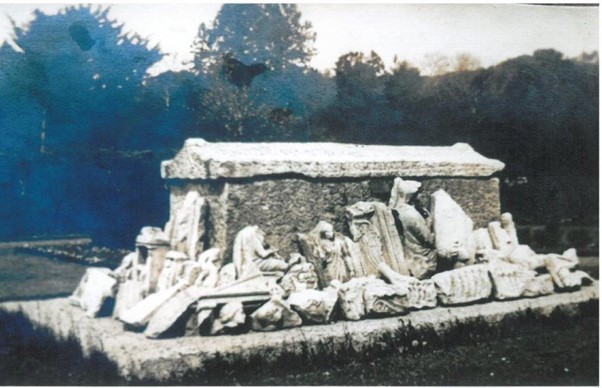 The West Gardens were once the site of beautiful manicured Italianate gardens, low hedging, meticulously trimmed greenery in a labyrinth maze-like design.

These gardens were originally created as an integral element of the Italianate Terraces in 1915, allowing the house’s residents and visitors to ‘take the air’ in a refined fashion. Structured pathways among planted patterns guaranteed that the lords and ladies could return to the house without suffering the indignity of a muddy hem. All Italianate Garden design is based on a very formal layout based on strict geometrical shapes.

The sarcophagus was brought to Westport House by the 2nd Marquess Howe Peter Browne in 1812 – he was widely read in Greek History and Greek Antiquities.  On his Grand Tour to Greece, the young Marquess came across the tomb and knew exactly where he wanted to display both the sarcophagus and the statuary that he had collected on his travels – the statuary which, unfortunately, are no longer at Westport House nor do we know where they are located today.

The Greek Sarcophagus taken from ‘The Decorator’ magazine, 1915 – showing the outline of the newly instated Italianate gardens.

An excerpt taken from the Painters’ magazine ‘The Decorator’ written in October 1915 gives another point of view of the treasury taken from Mycenae:

“The second Marquess (Howe Peter) brought home from Greece (1812) a collection of Greeco-Roman and pure Greek statuary-fragmentary indeed, but containing much that is of great archaeological interest, and some pieces of wonderful beauty. Of these we may mention the two curious columns which stood in front of the “Treasury of Athens” or “The Tomb of Agamemnon” as it is variously called, at Mycenae. These were lost sight of for nearly a hundred years, till they were re-discovered and traced to their original source by the present Marquess [6th Marquess George Ulick Browne], who prevailed on his father to present them to the nation, and they now occupy and honoured place in the British Museum. Some of the statuary is seen in the accompanying photograph, grouped around a plain Greek sarcophagus …Some more of these fragments are seen in another illustration, and special attention may be directed to two mutilated hands holding folds of drapery, which are certainly of the very best period of Greek art. This group forms the centre of a new pleasance which has been designed by, and laid out under, the personal supervision of the Marquess, who is adorning this side of the mansion – formerly somewhat neglected – with a system of terraces, the walls of which are seen in one of the pictures. The Marchioness has undertaken the flower garden, and, with exquisite taste in the massing of colour, is making what was a wilderness to blossom as the rose”

Picture Taken from the Decorator, 1915

The sarcophagus is certainly a highlight to visitors to the House – Howe Peters’ quirky style and imagination still manages to evoke a sense of awe for more than 200 years at Westport House!